Dear Sarah:
This book contains the life and times of my great-grandmother, my grandmother, my mother and me. I am the firstborn of a firstborn of a firstborn. I am ten years older than you, but I truly believe that you could have written this same sort of book about your family. I know you were not the firstborn, but I heard your daddy say that you could stand your ground with anybody, anywhere, anytime and greet any challenge with courage and grit and kindness.

I know you are a woman of faith in my Jesus Christ and that’s what I admire the very most about you. You went hunting and fishing with your dad and so did I. You know how to dress what you kill or catch and get it ready to serve to your family in your own kitchen with leftovers in the freezer to be shared with friends. Your husband is your greatest fan. Your kids are a blessing.

You are a faithful member of a church that teaches the truths of the Bible. You served your local school as a volunteer and made it better. You worked on the city council and served as mayor of your town and made it better. The Lord made a way for you to become governor of your great state of Alaska and you are currently moving things toward the better right where you are.

I believe that God saw that you were faithful in the little things and then because of that faithful work, He chose to place you in charge of many things. He has seen your servant heart and so have I and I am not alone. Be assured that you are not alone. The brutal personal attacks that were leveled against you and your loved ones were coming from the folks who don’t care about your values. They were not attacking you at all, even though it certainly must have been a painful time. They don’t even realize how plainly they showed their true colors. They were waging war against all that you represent…goodness, love, truthfulness, morality, justice. These are the values that are no longer highly prized in our drifting and wayward culture.

You and I both know that this was a battle for the soul of our country and that our spiritual thermometer is below freezing in many, many places. When our values are shaped by Oprah and Saturday Night Live and the rest of Hollywood, what do you expect? Frankly, I believe that those politicians were running scared that if you got elected to our second highest office that you would do exactly what you said you would do…rearrange their playhouses and kick some of them out on the garbage heap where they belong.

Personally, I would have loved to have seen you be a heartbeat away from the Presidency. You certainly received my vote. The day after the election, I bandaged my conservative wounds and signed up for the Inaugural Prayer Team for our president-elect. My copy of God’s Word says that I must pray for my leaders and be the best earthly citizen I can be. I am joining lots of folks who have made a covenant to pray for the new administration daily. Diligently, I am looking for a PALIN 2012 sticker to display on my guitar case and car bumper.

I determined to dedicate this fourth printing of THE LETTER BOOK to you because I know that my grandmother would have been a great campaign manager for you. If the Lord had let her live till 2008, I imagine she would have done all that she could to put you in the White House. Her blood flows right past this high cholesterol and straight through my veins. Her faith is my faith and your faith. May God bless you as you continue to live out your faith in a hostile world.

Becky Brown December 2008.
Posted by littlebrownlight at 9:54 PM No comments:

Stand firm in the Lord.
Abstain from sexual immorality.
Love one another.
Lead a quiet life.
Attend to your own business.
Work with your hands.
Comfort one another.
Be alert and sober.
Encourage one another.
Build up one another.
Appreciate spiritual leaders.
Live in peace with one another.
Admonish the unruly.
Encourage the fainthearted.
Help the weak.
Be patient with all men.
Seek after that which is good.
Rejoice always.
Pray without ceasing.
Give thanks in everything.
Do not quench the Spirit.
Examine everything carefully.
Hold fast to that which is good.
Abstain from every form of evil.
Do not be deceived.
Hold to the traditions which you were taught.
Strengthen your hearts in every good work and word.
Follow our example.
Do not grow weary of doing good.
Pray for us.
Greet each other with a holy kiss.
Read this letter to all your brothers.
+B+B+
BECKY BROWN
WWW.LITTLEBROWNLIGHT.COM
Posted by littlebrownlight at 12:11 PM No comments:

CAKE OF THE WEAK

One cup of marching with hidden, unconfessed sin
One cup of leading without direction from the Lord
A pinch of pride
A dash of fear
Mix with defiance and prayer-less-ness
Bake until burnt
File under: Double Decker Failure Deluxe
Rave Reviews: “This cake has fallen and it can’t get up!”

WARNING:
The Great Physician has declared that consumption of this cake could be hazardous to your spiritual health. It could potentially paralyze your spiritual walk. It could contribute to cloudiness of your spiritual vision.
Partake with fear and trembling…

Copyright 1997
From the Bible Study in the book of Joshua
“Joshua and the Stones of Remembrance”
Joshua and Achan and the Battle of Ai
Chapters Six, Seven and Eight
+B+B+
Becky Brown
www.littlebrownlight.com
Posted by littlebrownlight at 11:45 AM No comments: 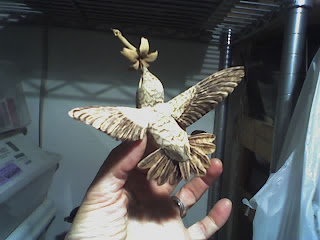 A bird in the hand waiting for the paintbrush. Thanks to the Lord for Mr. Oren Segrest, my bird carving teacher, who allowed me to learn how to carve in his shop. +B+B+ Becky Brown www.littlebrownlight.com
Posted by littlebrownlight at 7:30 PM No comments:

I dream. You know.
You call. I go.
Your Word. My need.
I hurt. You bleed.
I sin. You forgive.
You died. I live.
+B+B+
Becky Brown
www.littlebrownlight.com
Posted by littlebrownlight at 7:17 PM No comments:

These are the days
that you lean only on
the Lord of the call.
He is the peace of eternity
in the chaos of the temporary.
+B+B+
Becky Brown
www.littlebrownlight.com
Posted by littlebrownlight at 11:58 AM No comments:

And two robbers were crucified with Him,
one on the right and one on the left.
Matthew 27:38
And they crucified two robbers with Him,
one on His right and one on His left.
Mark 15:27
And when they came to the place called The Skull,
there they crucified Him and the criminals,
one on the right and the other on the left.
Luke 23:33
There they crucified Him, and with Him two other men,
one on either side and Jesus in between.
John 19:18
And one of the criminals who was hanged there was hurling abuse at Him, saying, “Are You not the Christ? Save Yourself and us!” But the other answered, rebuking him said, “Do you not even fear God, since you are under the same sentence of condemnation? And we indeed justly, for we are receiving what we deserve for our deeds, but this Man has done nothing wrong.” And he was saying, “Jesus, remember me when You come into Your kingdom!” And He said to him, “Truly I say to you, today you shall be with ME in Paradise!”
Luke 23:39-43